David Whish-Wilson is one of those rare authors who has achieved both critical  and popular acclaim — and for good reason. David’s fifth novel, The Coves, was recently published by Fremantle Press, and is generating plenty of interest among readers of quality historical crime fiction.

David was born in Newcastle, New South Wales, and raised in Singapore, Victoria and Western Australia. According to his website, he “left Australia in 1984 to live in Europe, Africa and Asia, where he worked as a barman, actor, streetseller, labourer, exterminator, factory worker, gardener, clerk, travel agent, teacher and drug trial guinea pig”.

His first novel, The Summons (Vintage — Random House, 2006) is a thriller set in nazi Germany during World War II. Line of Sight (Penguin), the first of David’s novels set in the seedier suburbs of Perth and featuring detective Frank Swann, was short-listed for a 2011 Ned Kelly Award. Penguin also released the sequel, Zero at the Bone, and Fremantle Press published the third Frank Swann novel, Old Scores, in 2016.

David has taught in the prison system in WA and in Fiji, where he started the country’s first prisoner writing program, which now operates in all Fijian prisons. He currently lives in Fremantle, Western Australia, and teaches creative writing at Curtin University.

If you’re looking for a top-notch title for a Father’s Day gift, you won’t go wrong choosing a book by David Whish-Wilson. For now, I’m sure you’ll enjoy reading his responses to my Shelf Aware questions.

Q. David, how would you describe the work that you do and how you do it?

A. I work in a range of forms and genres. I’ve written the text for a war memorial, for museum plaques and public artworks. I like writing creative non-fiction that refers to place, usually in essay form but with one book-length work (Perth, part of the NewSouth city series) on the subject. My primary trade is however as a crime writer, with three novels set in 1970s/80s Perth (and another out with Fremantle Press next year) that uses the form to explore the kinds of stories about the kinds of characters that you don’t necessarily find in history books, for example. I treat writing as a job like any other, and try and make sure that every book I write extends my understanding of the craft. My perfect writing day involves a long morning shift and a long afternoon shift, broken by lunch and a short siesta, with some editing done very late at night.

Q. What can you tell us about your latest writing project/book release?

A. My latest release is The Coves, out with Fremantle Press. It’s a new form for me, mixing a coming of age story with a crime narrative structure. The main character, Samuel Bellamy, one of the first children born to the Swan River colony, travels aged twelve to gold-rush San Francisco in 1849, where he falls in with a gang of Australian criminals known as the Sydney Coves, or the Sydney Ducks.

I was lucky enough to travel to San Francisco to research the story and this fascinating bunch of men and women who ran organised crime in the waterfront area of San Francisco throughout the 1850s.  I found it an interesting experience writing from the perspective of a child protagonist in a chaotic and lawless adult setting. I like the way children observe the world, and how they experience time more slowly, enabling them to be more ‘present’ in the world. This way of seeing the world enabled me to write The Coves as a small, tight historical crime narrative rather than as a giant historical epic, with just a few main characters and a more limited setting. Using the structure of a crime narrative allowed me to work with creating suspense over a smaller timeframe, without skimping on characterisation or a developed sense of the place as it was then.

A. My wife is a high-school English teacher and so most of the books at home are hers, or those belonging to my three kids. I have a massive TBR pile beside my bed. The usual process is to work through the pile and transfer them to the boot of my car. When that gets too full I move them into my office at Curtin University, which is where I keep the majority of my books. 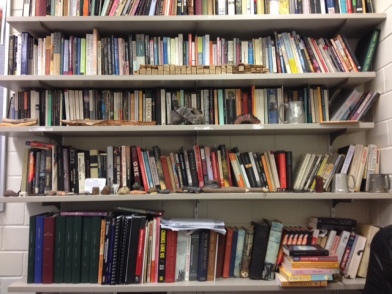 A. Fortunately my office is full of bookshelves. Even so, there are plenty in boxes and piled on the floor. There are gaps in the shelves where I’ve leant out books to students. A while back I worked as a poetry teacher in the prison system over here – I loaned out dozens of books to inmates over the years, never expecting them back. I quite like the idea of those books still floating around the prison system. A couple of years ago when I turned fifty I decided to cull my book aggregation (this term is more accurate for me, I think, rather than collection) based on the single question – will I want to read this book again before I die? Answering this question enabled me to donate away several hundred books.

My bookshelves aren’t particularly ordered beyond categories such as poetry, crime fiction, Aboriginal subjects (which I used to teach), writing textbooks, philosophy or theory, history, and books about Perth (a subject I find endlessly fascinating). I have some favourite writers whose books are placed together, whose works I sought out until I’d read everything they’d ever written, such as Paul Bowles, Joseph Roth, Jean Genet, Penelope Fitzgerald, Megan Abbott, Peter Temple, Cormac McCarthy, James Ellroy, Saul Bellow, Gail Jones, Joan London and plenty of others. I also have a shelf of signed books written by friends, students, or books that I’ve blurbed.

A. I can read anywhere, although my favourite place is reclined on the swag in my writing room, or in bed, or if the kids are being noisy, on the bean bag in our TV room. 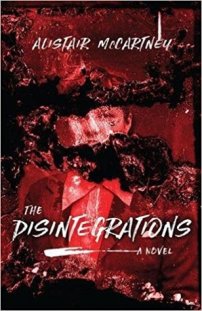 A. I’ve just finished reading a terrific historical fiction novel called The Making of Martin Sparrow, which I’m reviewing for ABR. I’m currently reading a book that was given to me by a writer, Alistair McCartney, who grew up in Perth but who now lives in LA. It’s called The Disintegrations and consists of short meditations upon memory and death. It’s beautifully written and recently won the USA Publishing Triangle’s Ferro-Grumley award for LGBTQ Fiction. My youngest kids are nine and twelve, and at night we’ve returned to doing bedtime ‘story-time’, involving each of us taking turns to read a couple of chapters a night of AJ Betts’ latest novel, Hive. I’m loving it, and so are they.

A. Too many to mention, particularly as I range widely across genre and form, with favourite writers in each. One thing I will say is that over the past decade in particular, I find myself reading more and more Australian writers. Local writers whose work I wait in anticipation for include Angela Savage, Amanda Curtin, Alan Carter, Iain Ryan, Jock Serong, Kim Scott, Josephine Rowe, Andrew Nette, Gail Jones, Julienne van Loon, Deborah Robertson, Paul Hardisty, Rohan Wilson and about a dozen more.

A. I’ve just inherited a book that my great-grandfather Oliver and his brother Francis Whish-Wilson brought out with them from India (where they were born into a Scottish soldiering family) when they migrated together to Tasmania in the early 1880s. It’s the collected poetical works of Robbie Burns. I’m just about to begin reading it, so would grab that first. I’m not too sentimental about books but would probably grab one of the Ngugi wa Thiong’o novels that I bought in Tanzania when I lived in East Africa as a teenager, and maybe Meja Mwangi’s Going Down River Road, which is equally battered and well-travelled.

Q. If you could sit down for afternoon tea with your three favourite characters or authors, who would they be, what would you serve them, and what would you like to talk to them about?

A. I would love to get Cervantes, Peter Temple and Gogol together in a room. Spanish and Australian wit meets Russian inquisitiveness and straight-talking. I would serve them a big bowl of zarzuela, my favourite soup, with fresh bread. There would be lots of red wine. I wouldn’t speak much, I don’t think, just listen.