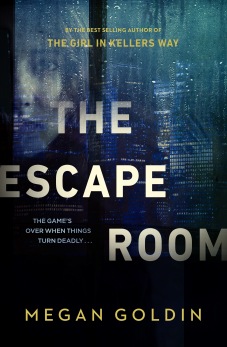 Former journalist and Reuters Middle East and Asia correspondent Megan Goldin’s new thriller The Escape Room (Penguin) taps into the emerging zeitgeist around workplace sexism and bullying, and reflects the evolving role of women in business and positions of authority — while reinforcing the understanding that we’ve still got a long way to go in terms of equality and respect.

As a follow up to her bestselling debut The Girl in Kellers Way, it confirms Megan’s position as an Australian novelist making a significant impact at home and further afield (read her Shelf Aware guest post here). Such is the quality of her storytelling, that Megan is even impressing genre specialist Lee Child (author of the Jack Reacher series, and more), who describes The Escape Room as one of his favourite books of the year.

Megan tells me the plot for The Escape Room ‘took on a life of its own’ once she started writing, and her journalistic interest in politics inspired some ideas about office politics. Read on to find out more about the story behind this gripping tale of corporate intrigue and competition, with a murderous twist.

ME. What inspired the plot for The Escape Room?

MG. My writing tends to be very fluid and the plot took on a life of its own once I started writing. But my starting point for the novel began with some ideas that I had for a corporate noir thriller that delved into office politics. I’ve always been fascinated by politics – perhaps that’s the journalist in me. And there’s no politics more ruthless than office politics. People who work together have so many secrets ranging from their salaries and bonuses to whose saying what about whom to the boss, and various other machinations that go on in most offices. I wondered what would happen if those secrets slowly unfurled in the worst possible place at the worst possible time. It was around the time that this idea was bubbling in the back of my mind as I brainstormed ideas for my second novel that I was briefly stuck in a dark elevator. I figured that would make the perfect setting for my novel.

ME. What can you tell me about your research for this novel?

MG. I did a lot of research on elevators from understanding how they work and their dimensions and interior design to the more interesting aspects of human behaviour in elevators. I read psychology papers on how people behave in elevators which I found fascinating including a series of videos from the 1960s which ran on the show ‘Candid Camera’ and were absolutely hilarious. Perhaps most importantly I researched a few cases of people who were stuck in elevators and in some cases died. One of the most fascinating accounts was of a magazine editor who was stuck in an elevator for 41 hours. He has written about what happened during those hours of incarceration. In terms of researching the Wall Street lifestyle, I read extensively about Wall Street and then delved into blogs and forums by people who work in Wall Street. It gave me a sense of everything from what they wear, to their work-life balance (or rather imbalance) to issues related to their job, pay, bankers bonuses and how to deal with their bosses. I also sprinkled a few of my own work experiences in the novel such as an awful interview that I did after having my third baby in which the interviewer crunched on nuts throughout the interview.

ME. I’ve seen in social media that bestseller Lee Child has described the book as “Fantastic – one of my favourite books of the year.” How did that make you feel?

MG. Well, I had to pinch myself a few times! He was the first person outside of Penguin to read the book and I wasn’t sure whether he’d like it or not. In fact, I had several sleepless weeks worrying about it as I waited to find out whether he’d read it, and if he had read it whether he liked it. To get a response like that was amazing.

ME. How did writing and publishing The Escape Room differ from writing The Girl in Kellers Way? Was it easier, or harder – or something in between?

MG. I worked with the same publisher and editor at Penguin and they were absolutely fabulous to work with, as they had been the previous time. But I suppose this time I knew what to expect which made it a little easier. Also, they were involved from the moment I had a first draft which saved a lot of time as I was able to incorporate their feedback into the second draft.

ME. What were some of the challenges associated with writing this book?

MG. This was a tough book to write. I knew it would be when I started writing it. I have quite a few rather complex characters. A complicated story. And it’s set in an elevator which is a very challenging place to set a novel. Plus there was the challenge that all writers who work on thrillers have which is maintaining pace and the integrity of the story. Added to all of that was setting large parts of the novel in an elevator and the psychological meltdown of the characters. It was tough to write but I really enjoyed the challenge.

ME. And what did you enjoy most about developing the characters and the story?

MG. I am one of those writers who don’t plan too much ahead of time. It all develops as I write which makes it quite an enjoyable experience as I don’t always know what’s coming around the next corner. The story took me in directions that I didn’t expect and had a lot of fun writing the dialogue and trying to capture the essence of my characters and the Wall Street corporate environment in which they worked.

ME. Why do you think that books exposing sexual harassment and professional bullying are important in contemporary times?

MG. It’s important to talk and write about these things so that people and companies can address them and change the culture. I am a strong believer in shining a spotlight on whatever is wrong in our society so that the problems are addressed rather than shoving them under the carpet and hoping they will go away.

ME. There’s a distinctly cinematic quality to your writing. Has there been any interest in adapting this book or The Girl in Kellers Way into a feature film and, if so, to what extent would you want to be involved in the project?

MG. I’ve been told that by many people who read the books. I think it’s partly because when I write I almost see it all happen in my head as if I was watching a movie. I have a film agent in the United States and there are various things happening though it is a slow process. I’ve written screenplays before and would be excited about getting involved potentially, but by the same token I have a lot more books that I’d like to write so it really would depend on whether my input is needed should either novel be turned into a film.

ME. How do your skills and experience as a former journalist help in your new career as a writer of fiction?

MG. I often think that one of the greatest skills as a journalist which is absolutely an imperative for a novelist in this day and age is persistence. Whether it’s persistence in writing a manuscript even on days when I’d rather do a dozen other things, or persistence in getting published, there is no doubt in my mind that persistence is a very important quality. That is obviously in addition to the ability to write and come up with a plot, characters and dialogue and so on.

ME. What led you to write in the thriller genre?

MG. I read widely but I’ve always enjoyed a great thriller, whether it’s a book or a movie. It’s a fantastic genre that gets my heart racing and adrenalin pumping.

ME. Can you tell readers of the blog a little bit about your writing routine or writing process?

MG. I have three kids and so I write whenever they are not around. That usually means that I write from the time they go to school until the time they come back as well as at night from about 9 or 10 pm until the early hours of the morning. School holidays are the worst for me because my kids are around and they go to sleep late so I often try to schedule my writing so that I do the bulk of it during term time.