Crime writer and television documentary director Alan Carter has been visiting Western Australia in the past few days, to promote the June 1 release of his latest novel, Marlborough Man (Fremantle Press). It’s a fast-paced, gritty and witty tale set in the spectacularly beautiful Marlborough Sounds region of New Zealand (where some of my favourite wines are produced), and it had me totally engrossed from the first page to the last. In fact, I’m already eagerly awaiting a sequel (no pressure, Alan).

In Marlborough Man, Sergeant Nick Chester has been relocated to the remote and idyllic Marlborough Sounds region of New Zealand with his wife and son, after an undercover operation in the UK goes horribly wrong. While maintaining a low profile in his new post, Nick and colleague Constable Latifa Rapata have their hands full trying to catch whoever is snatching, torturing and killing children. Add to the mix the threat of discovery by the mobsters Nick outsmarted back in the UK, trigger-happy hunters close to his new home, and his wife’s growing concerns about the family’s safety, and you’ve got a tale that will keep you gripped into the wee small hours.

For me, Nick Chester has the same sort of appeal as one of my all-time favourite fictional crime fighters, Ian Rankin’s Inspector John Rebus — with that attractive combination of innate intelligence, contempt for authority and black humour. The repartee between Nick and Latifa was a delightful bonus.

Alan’s previously published works are also impressive. He is the author of three Cato Kwong novels — Prime Cut, Getting Warmer and Bad Seed — which are published in Germany, France, Spain, the UK and the USA. And he has been shortlisted for the prestigious UK CWA Debut Dagger Award, was runner-up in the Penguin Crime Writing Competition, and won the Ned Kelly Award for Best First Fiction.

Born in Sunderland, in the UK, Alan immigrated to Australia in 1991, and now divides his time between his house near the beach, in Fremantle, Western Australia, and a hobby farm in a “remote-ish” valley in New Zealand (check out the view from his home, in the images below). In his spare time, Alan “follows a black line up and down the local swimming pool”.

Some of Sergeant Nick’s dry, self-deprecating wit is evident in Alan’s responses to my Shelf Aware questions, which had me laughing out loud and left me with a smile on my face. I hope you also enjoy what he has to say — and I recommend you look out for Marlborough Man in good bookshops. It’s a cracker!

Q. Alan, how would you describe the work that you do and how you do it?

A. I write crime fiction, I sit every day at the kitchen table and conjure up terrible things… and funny things, and suspenseful, and moving. Well I try my best anyway.

Q. What projects are you currently working on or do you have in the pipeline? 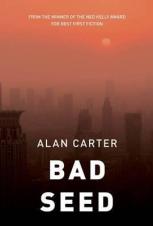 A. I have written 3 ‘Cato Kwong’ thrillers and am about to release a new stand-alone story set in New Zealand — Marlborough Man — due out 1/6/17. I am currently writing a 4th ‘Cato Kwong’ book. 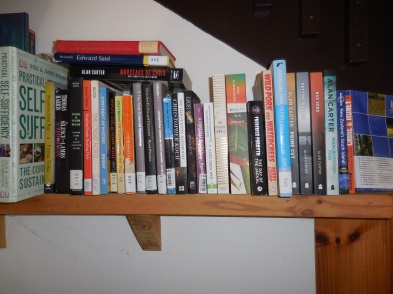 A. The main bookcases are in the living area/room. I am more likely to read than watch tv these days. There’s also a granny flat with three large boxes full of books. I’ve also got a fair few on my kindle for when I need to travel light.

A. No real system but I do tend to have them grouped under the same author but not necessarily alphabetic or date order. It’s like vegies on a plate, peas all together, carrots altogether. Dollop of spud…

A. Crime fiction predominates but sometimes I’ll chuck in something deep and literary or even factual or biographic so people don’t take me for granted. I’m also in a book club and they tend to make me read deeper, artier stuff.

A. We have a house overlooking a river and remote-ish valley in New Zealand and a chair by the window and sometimes I feel like I can flip from book to view and back again all day. 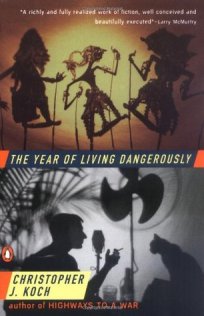 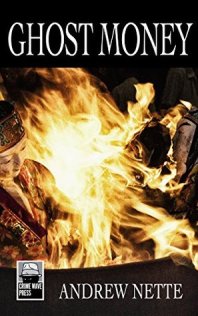 A. As it’s tied in to an area of study I’m following I’m reading a whole series of crime books in the ‘Islands’ genre, set in the archipelago to Australia’s north and interrogating, sometimes, Australia’s relationships with its near neighbours. Charlotte Jay’s Beat Not the Bones in a thinly-disguised PNG, Christopher Koch’s The Year of Living Dangerously, Andrew Nette’s Blood Money. Plus a whole heap of related and sometimes turgid academic texts. Beat Not the Bones is a revelation. 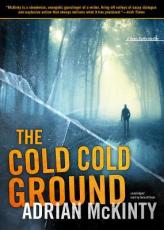 A. I’m a welded-on fan of Ian Rankin’s Rebus series, plus I’m enjoying Adrian McKinty’s ‘Sean Duffy’ universe. Two books I return to every decade or so are Robert Graves’ I, Claudius and Claudius the God. 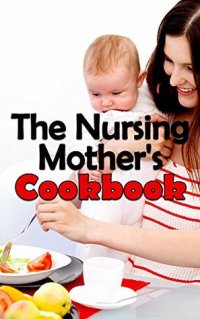 A. Having now experienced a significant earthquake in NZ (plus a local flood the following day) emergencies are closer to home these days. I would save whichever book I’m writing onto my thumb drive if I’ve neglected to email it to myself recently. Plus the manual for the chainsaw if we have to cut our way out of there. And maybe The Nursing Mother’s Cookbook – some mighty fine emergency recipes in there.

Q. If you could sit down for afternoon tea with your three favourite characters or authors (or poets, or illustrators), who would they be, what would you serve them, and what would like to talk to them about?

A. Sean Duffy would get a vodka gimlet in a pint glass and a spliff (though he’ll need to roll his own), John Rebus a stiff measure of highland park, and Cato Kwong a mug of strong flat white, no froth. I’d show them the stunning view out of Marlborough Man’s window then we’d sit on the back balcony, slap on some sandfly repellent, and talk about the world going to hell in a handbasket and what it takes to keep on keeping on.

Find out more about Alan here: